For the second consecutive year Advisen Ltd administered a survey sponsored by Zurich to gain insight into the current state of and trends in information security and cyber risk management in Europe.
The survey was conducted for 10 days beginning on Monday, 11 February, 2013, and ending on Wednesday, 20 February, 2013. The survey was completed at least in part by 41 risk managers, insurance buyers and other risk professionals.
The largest percentage of respondents (59.0 percent) classified themselves as Members of Risk Management Departments (not Head), followed by Chief Risk Manager/Head of Risk Management Department at (37.0 percent) and Other Executive Management (5.0 percent). Respondents with more than 20 years of risk management experience represented the largest group at 56.1 percent of the total, followed by 22.0 percent with between 11-20 years, 19.5 percent with 6-10 years and 2.4 percent with 5 years or less.
The distribution of survey respondents based on the location of their head office is 36.6 percent in the UK, 34.2 percent other EU country, 12.2 percent Europe other than EU, 4.9 percent North America, 7.3 percent Asia, 2.4 percent Africa and 2.4 percent Australia/New Zealand.
The survey includes businesses of all sizes but is weighted towards larger organizations, with more than two thirds of respondents having annual turnover of greater than €1 billion. 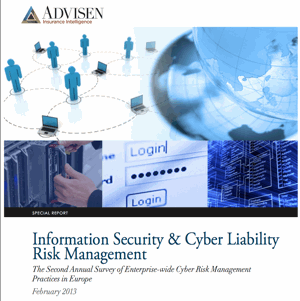