The global cost of Cyber Crime is estimated by the Center for Strategic and International Studies to be up to $575bn in it’s report entitled “Net Losses:Estimating the Global Cost of Cybercrime”, sponsored by McAfee.

The report tries to assess the impact on the global economy by looking at the range of costs and losses associated with Cyber Crime a create an approximate total.

The study estimates that hundreds of million individual records in 2013 and that this could be generating as much of $160bn in additional costs and losses.   The scale of the problem is potentially huge and, if correct, undermines the economic contribution of the Internet (estimated as being between $2-3trillion) and costs hundreds of thousands, even millions of job

The scale of the claimed effected places the effects of Cyber Crime alongside Counterfeiting and Piracy, Narcotics and car crashes.

The report acknowledges the difficulties of calculating a dollar value on the impact of Cyber Crime and approaches the issue by looking at both direct and indirect costs and the assessment includes:

CSIS are candid that their estimates are based on incomplete data  and this leads to more variation than usual.  This is principally due to the problem of so many cyber crimes being unreported and few countries having made serious efforts to quantify the impact within their jurisdictions.  However, by using Meta Research and aggregation techniques information was developed for 51 countries covering around 80% of global revenues.

To read the report please click the link below. 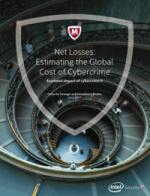 In November 2012 the National Protection and Programs Directorate of the US Department of Homeland Security released the findings from its Cybersecurity Insurance workshop.

The workshop was delivered in November and engaged with a diverse group of stakeholders to discuss how organisations may better develop an effective connection between the cyber security activities they undertake and the broader topic of insurance.  Over 60 participants attended to discuss the issues and opportunities.